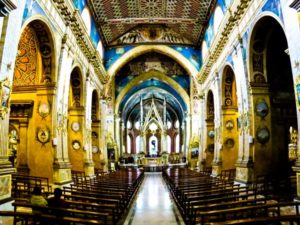 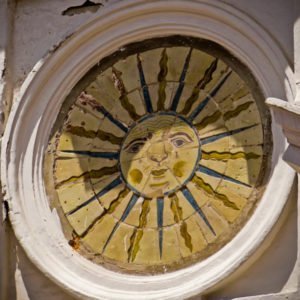 3. Description: Balconies, steps and arch at the end of La Guaragua.
Location: Galápagos St., between Guayaquil St. and Vargas St.
Details: “Guaragua” means exaggerated adornment, a picturesque place. The houses that characterize this pedestrian crossing were built between 1927 and 1929. The most representative building forms an arch that crowns the passage, at the end of the stairs. The construction links two independent houses. Architect Andrés Peñaherrera considers this infrastructure “unique” in the city. This demonstrates the integration that existed between neighbors and the conjugation of the residential and urban aspect. 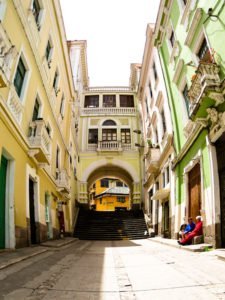 4. Decorated interior of the dome and scallops of the Santa Barbara Church.
Location: Santa Bárbara Church, Garcia Moreno St. and Manabí St.
Details: Juan Pablo Sanz built Santa Barbara Church in the 16th century. From August 1586 until January 1589, Jesuits lived in the church. It is a modern church that currently contains only some antiques: Saints cloths and statues.
The Santa Bárbara Church, located in Quito’s downtown between Garcia Moreno St. and Manabí St., has a design of the late nineteenth century, although its foundations dates from the beginning of the Spanish arrival, as it was rebuilt after being destroyed during the State Monopoly Revolution (Revolución de los Estancos).

Originally the church of Santa Barbara was a “humilladero”, place where the first masses of the Spaniards were carried out; only later, in the late 1560s, it became a parish church. 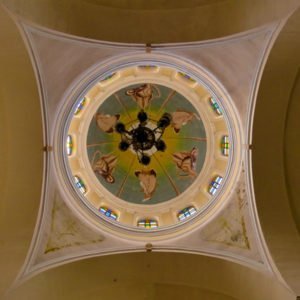 5. Description: A plaque to remember the house 1334 on García Moreno St.
Location: García Moreno St. N7-34 (1334) and Olmedo St.
Details: CASA BONILLA: House 1334 belonged to Simon Saenz, Manuelita Saenz’ father. This interesting house not only draws attention for its colorful facade but also from the plaque placed in 1987 on the second floor that says “IN THIS HOUSE BOLÍVAR DANCED”.
Jurado Noboa considers that this could be true, because the owner in the time of the Independence was friend with the Liberator. Dr. Gonzalo Bonilla Ramos acquired this house at the beginning of the 1970s, who took care of the house, improved it according to his criteria, so he exaggerated in some details to provide a colonial air that it never had, since stylistically it is a neoclassical house, probably from the beginnings of the Republic. Among other merits, Dr. Bonilla was an antique collector and works of art, some of which are still preserved in the house, in the hands of his heirs. 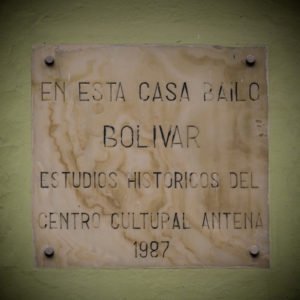 How to arrive to Papallacta?
How to get to Cotopaxi?
Panama Hat Factory and Museum in Cuenca
To the Cotopaxi!
Categories:
Blog